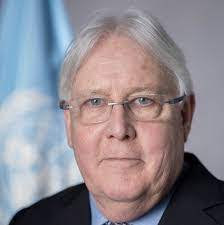 Mr. Griffiths succeed Mark Lowcock of the United Kingdom to whom the Secretary-General is deeply grateful for his dedicated service to the Organization and commitment in mobilizing assistance and resources to protect and alleviate the conditions of the many people affected by humanitarian crises.

Mr. Griffiths brings extensive leadership experience in humanitarian affairs at headquarters and country levels, both strategically and operationally, as well as senior level experience in international conflict resolution, negotiation and mediation, most recently as the Secretary-General’s Special Envoy for Yemen (since 2018), a position he will continue to serve until a transition has been announced.

Mr. Griffiths served as Adviser to three Special Envoys of the Secretary‑General for Syria and Deputy Head of the United Nations Supervision Mission in the Syrian Arab Republic (UNSMIS) (2012-2014).  He was the first Executive Director of the European Institute of Peace (2014-2018) and founding Director of the Centre for Humanitarian Dialogue in Geneva (1999-2010), where he specialized in developing political dialogue between Governments and insurgents in a range of countries across Asia, Africa and Europe.

He holds a master’s degree in Southeast Asian studies from the School of Oriental and African Studies at the University of London and is a qualified barrister.  He speaks English and French.