About the Grand Bargain

Origin and concept of the Grand Bargain

As part of the preparations for the World Humanitarian Summit (WHS) in 2016, the High-Level Panel on Humanitarian Financing sought solutions to close the humanitarian financing gap. Their report made recommendations to shrink the needs, deepen and broaden the resource base for humanitarian action, and to improve delivery. In relation to the latter recommendation, the report suggested “a Grand Bargain between the big donors and humanitarian organisations in humanitarian aid”.

The Grand Bargain, launched during the WHS in Istanbul in May 2016, is a unique agreement between some of the largest donors and humanitarian organisations who have committed to get more means into the hands of people in need and to improve the effectiveness and efficiency of the humanitarian action.

Evolution of the Grand Bargain

As the Grand Bargain entered its fifth year in 2021, the Signatories made a decision on the evolution of the process moving forward. They endorsed the Framework and the annexes for the Grand Bargain 2.0. The Grand Bargain 2.0 reframes the overall objective to achieving “Better humanitarian outcomes for affected populations through enhanced efficiency, effectiveness, and greater accountability, in the spirit of Quid pro Quo as relevant to all”. In order to achieve this impact and measure the success of the future Grand Bargain, two enabling priorities have been agreed to, (i) A critical mass of quality funding is reached that allows an effective and efficient response, ensuring visibility and accountability (ii) Greater support is provided for the leadership, delivery and capacity of local responders and the participation of affected communities in addressing humanitarian needs.

The structure and membership of the Grand Bargain

Initially thought as a deal between the five biggest donors and the six largest UN Agencies, the Grand Bargain now includes 64 Signatories (25 Member States, 23 NGOs, 12 UN agencies, two Red Cross movements, and two inter-governmental organisations). In 2019, this represented around 84% of all donor humanitarian contributions donated in 2019 and 69% of aid received by agencies.

In 2022, the Signatories are working across five workstreams to implement the commitments:

In 2021, following the endorsement of the Grand Bargain 2.0 Framework, the workstreams were invited to reflect upon their past achievements and future role in the Grand Bargain 2.0 - and to decide whether the workstream structure can continue to provide an added value for them, or whether they achieved their objectives, or would be better placed to address them in a different fora. Three workstreams decided to close down:

In 2018, workstream 10 (Enhance engagement between humanitarian and development actors) has been closed as an independent workstream and mainstreamed as a cross-cutting commitment.

The Grand Bargain is championed by an Eminent Person, Mr Jan Egeland (Secretary-General of the Norwegian Refugee Council), responsible for promoting and advocating for the advancement of the Grand Bargain commitments.

A Facilitation Group has been established to provide continued momentum to the overall Grand Bargain process. The composition of this group is reflective of the different Grand Bargain constituencies (two donors, two UN agencies, IFRC/ICRC, NGO consortia).

Each workstream is co-convened by one donor government representative and one humanitarian agency or organisation.

Caucuses are a new tool of the Grand Bargain 2.0, focused on specific strategic issues in an ad hoc manner, with clear objectives and a limited timeframe. Any Signatory can be a champion and start a political caucus by communicating its elements as defined in the criteria for establishment of caucuses (see below) and inviting relevant OFFICIAL stakeholders to the caucus. Click here to read more about caucuses and how they are established.

National Reference Groups are national level, constituent-based, consultative forums for humanitarian stakeholders that are led by local and national actors. Click here to read more about them. 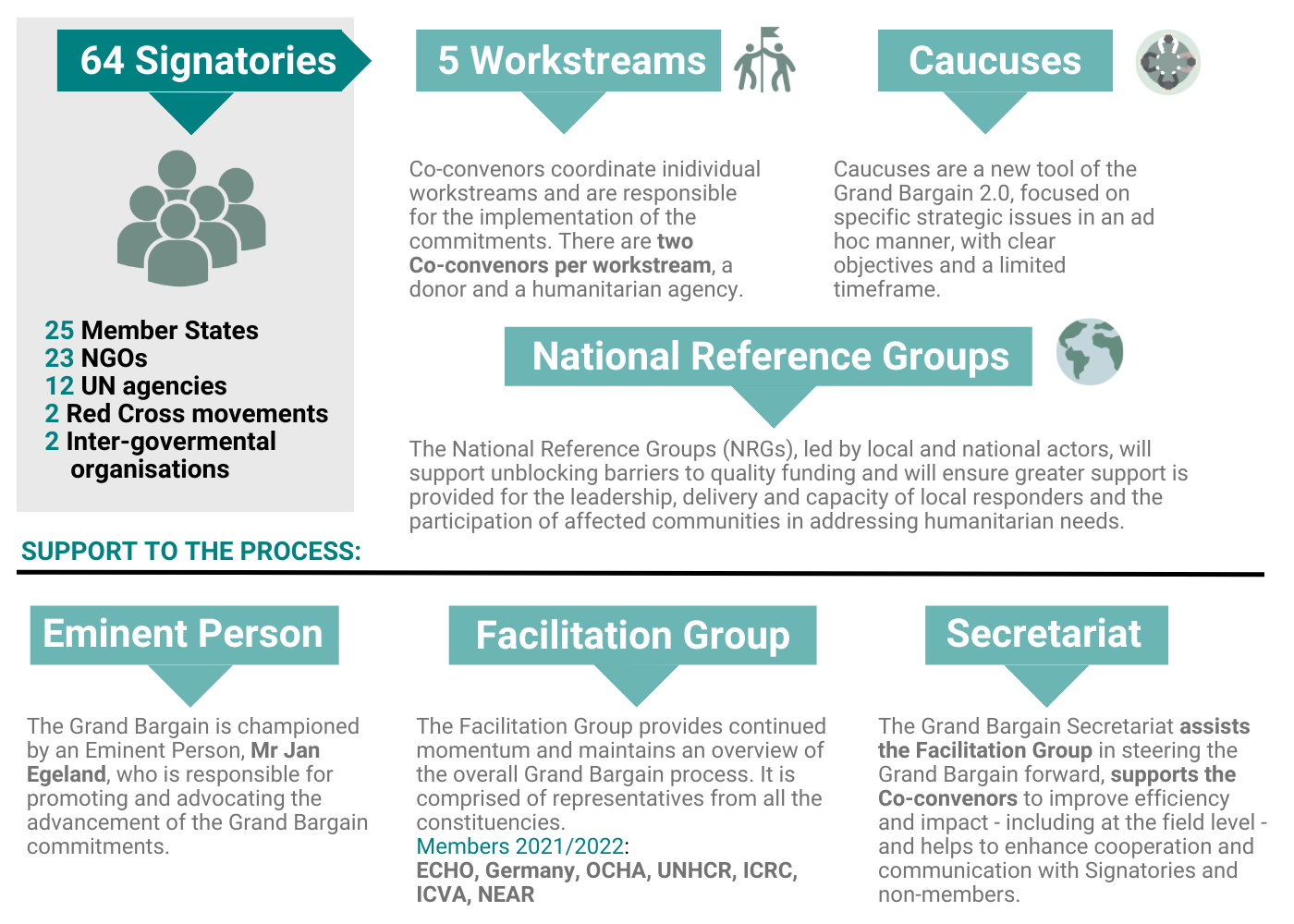 Grand Bargain progress is assessed in an Annual Independent Report, based on self-reports submitted by the Signatories and workstream Co-convenors. The progress and next steps are agreed upon at an Annual Meeting, which brings together all the Signatories.

As needs of affected people are increasing, the humanitarian community has to find better ways to respond to crises. As one of the three recommendations of the High-Level Panel on Humanitarian financing, the Grand Bargain helps to overcome this gap by making humanitarian aid more efficient. 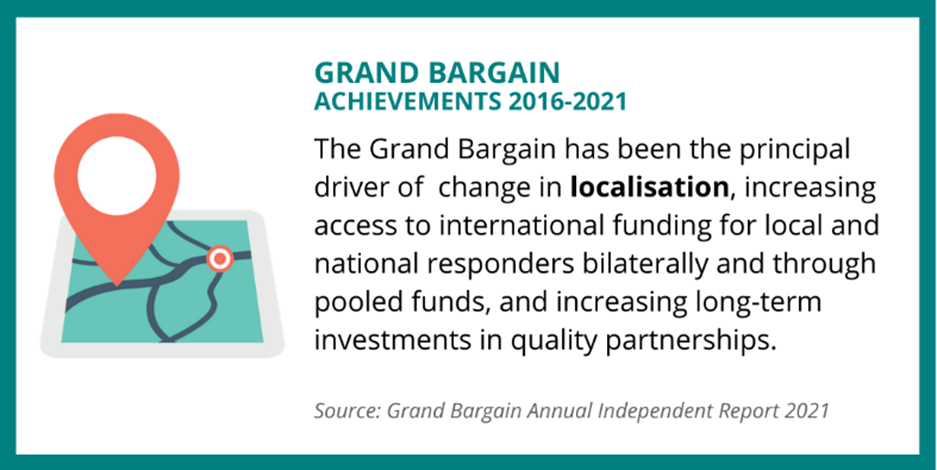 Read here the examples of the Grand Bargain commitments implemented in practice.