The Emergency Relief Coordinator (ERC) is the most senior UN official dedicated to humanitarian affairs. The ERC reports directly to the United Nations Secretary-General and serves as a focal point for governments, intergovernmental, and nongovernmental organisations on humanitarian issues. In this capacity the ERC is often called before the UN Security Council in response to humanitarian emergencies.

The UN General Assembly Resolution that created the position of Emergency Relief Coordinator also founded the Inter-Agency Standing Committee and made the ERC its Chair. This gives the ERC the unique power to convene a meeting of the Committee and to set the agenda. As Chair of the IASC, the ERC consults the Committee to develop unified positions and mobilise resources in response to humanitarian crises.

In the event of a crisis, the ERC may appoint a Humanitarian Coordinator (HC) to lead the response on the ground. If the emergency requires specialised support, the HC may request that a 'Cluster'; a multi-agency group of thematic experts; be activated. The ERC seeks the inter-agency agreement required to activate a Cluster, and decide which agency should lead it, through the IASC. 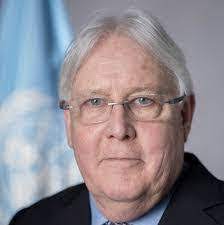 Mr. Griffiths brings extensive leadership experience in humanitarian affairs at headquarters and country levels, both strategically and operationally, as well as senior level experience in international conflict resolution, negotiation and mediation, most recently as the Secretary-General’s Special Envoy for Yemen (since 2018), a position he will continue to serve until a transition has been announced.

Mr. Griffiths served as Adviser to three Special Envoys of the Secretary‑General for Syria and Deputy Head of the United Nations Supervision Mission in the Syrian Arab Republic (UNSMIS) (2012-2014).  He was the first Executive Director of the European Institute of Peace (2014-2018) and founding Director of the Centre for Humanitarian Dialogue in Geneva (1999-2010), where he specialized in developing political dialogue between Governments and insurgents in a range of countries across Asia, Africa and Europe.

All the statements by the ERC

The Emergency Relief Coordinator delivers frequent statements, which you can keep up to date with here.