Workstream 2 on Localisation: Potential of pooled funds for localisation, and a call for country-based co-facilitators - November 2020 update

The Localisation Workstream is seeking self-nominations for potential country-based co-facilitators to support the dialogue processes on localisation. Nominations should be submitted together by at least three co-facilitators, one of which must be a local actor and one a GB signatory. These dialogue process are aimed to promote implementation of as well as a greater sense of momentum on the GB commitments on localisation at the country level and to gather lessons that can inform discussions and strategic direction in relation to the next phase of the Grand Bargain beyond June 2021. Support and follow-up on dialogue processes will be provided by the Workstream and this will include: (1) orientation and advice on organising the dialogues with the main constituencies of the Grand Bargain; (2) provision of background and guidance materials; (3) facilitating south to south learning and exchange among countries and; (4) providing periodic feedback information. More details on the call for nominations can be found in the file below. 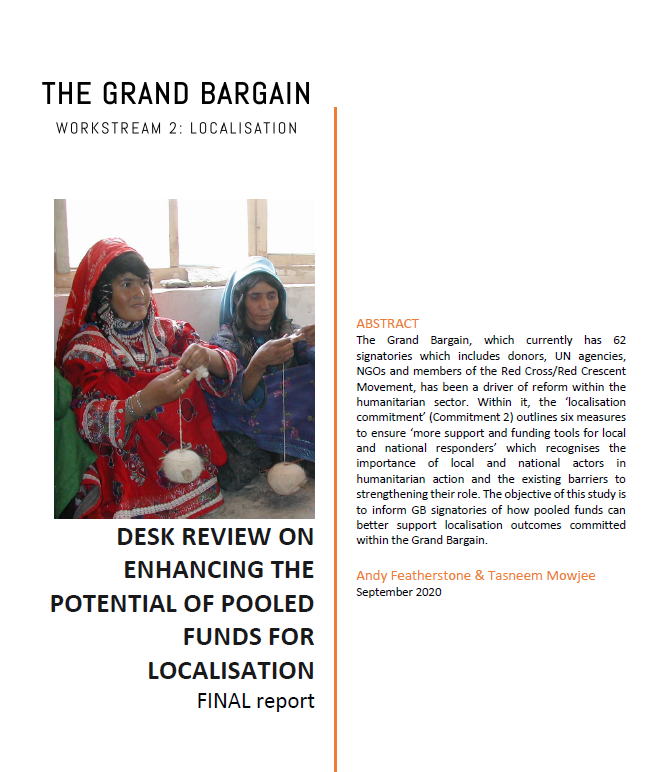 Desk Review on Enhancing the Potential of Pooled Funds for Localisation

The final report of the Desk Review on Enhancing the Potential of Pooled Funds for Localisation is now available and will be launched in a public webinar on 02 December 2020. The review contains a comparative analysis of the key advantages and barriers between different pooled funds and an analysis of the extent to which pooled funds can complement other investments on localisation. One important finding highlighted in the report is that 'pooled funds channel far more funding (both in volume and percentage terms) to local and national actors than bilateral donors, particularly in conflict contexts. The report also noted, however, that 'there is a fundamental need to address the inequities and inconsistencies in how pooled funds and partners contribute to their overhead costs.' The desk review was managed by the Oxfam Empowering Local and National Humanitarian Actors (ELNHA) Program, with oversight and support by the Pooled Funds subgroup of the GB Localisation Workstream. The full report can be accessed below.