According to the World Food Programme (WFP) and the Food and Agriculture Organization of the United Nations (FAO), over 34 million people around the world are facing emergency levels of acute food insecurity (Integrated Food Insecurity Phase Classification (IPC) 4). Without urgent action, they risk falling into famine or famine-like conditions.

In February 2021, WFP and FAO issued a Call for Action to Avert Famine in 2021, warning of a massive scale-up in food insecurity. Around 174 million people are in IPC Phase 3 (Crisis) or worse in 58 countries, compared to 135 million in 2019. Economic shocks and the socio-impacts of COVID-19, weather extremes and conflict dynamics are some of the key drivers associated with this dramatic increase.

An early warning analysis, Hunger Hotspots, was published by FAO and WFP in late March 2021, outlining 20 countries and situations where deterioration of acute food insecurity is imminent over the coming months. 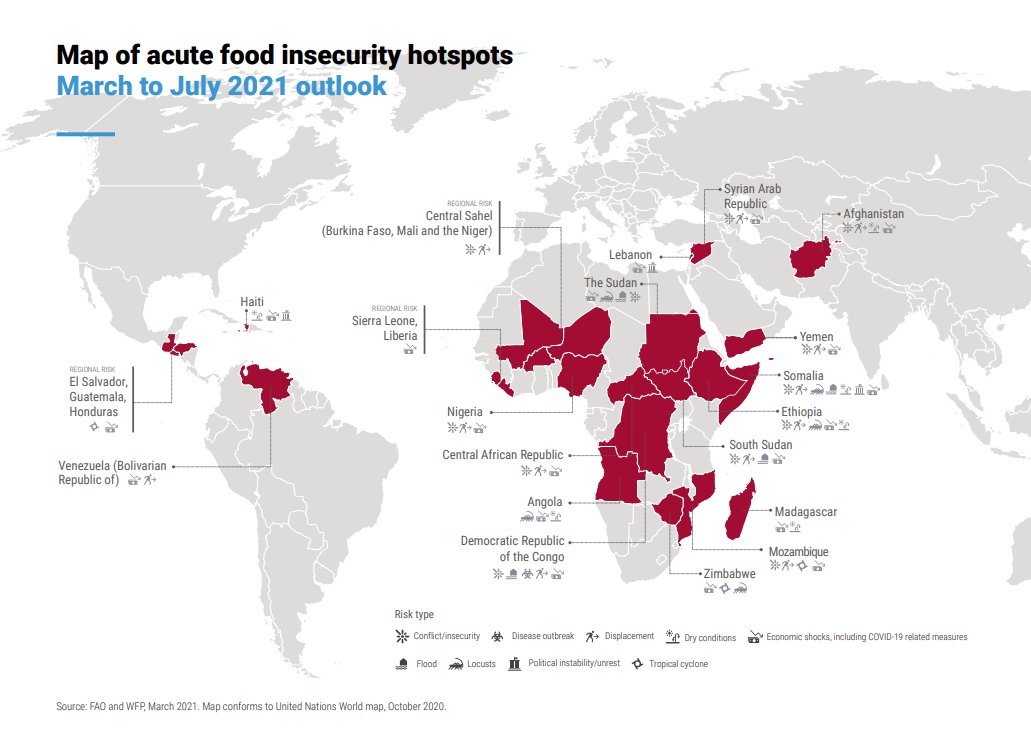 (Above map is from the FAO and WFP Hunger Hotspots report)

Yemen, South Sudan and Nigeria were identified in the report as countries with the highest alert. It is expected that the number of people to face high levels of food insecurity in Yemen will increase to 16.2 million people, rising by nearly 3 million. In some areas of South Sudan, famine was most likely already happening between October and November 2020 and is expected to continue through the next lean season. Northern Nigeria, plagued by continued violence and forced displacement, is projected to have a serious deterioration in food security. The number of people in emergency acute food insecurity (Cadre Harmonisé Phase 4) is likely to almost double, increasing to more than 1.2 million.

Humanitarians are calling for urgent action to avoid the worst. UN Secretary-General António Guterres established a High-Level Task Force (HLTF) on Preventing Famine to coordinate attention on famine prevention and mobilize support to affected countries. The Task Force will be led by Under-Secretary-General for Humanitarian Affairs and Emergency Relief Coordinator, Mark Lowcock and include representatives from WFP and FAO.

IASC key actions to address famine includes ensuring a system-wide approach, development of advocacy messages with focus on resource mobilization, stronger collaboration on data and building on existing mechanisms and ensuring complementarity, particularly with the engagement of the Global Food Security Cluster to advance the efforts of the HLTF on Famine.

WFP and FAO estimate that in 2021 at least $5.5 billion is needed in urgent food and agricultural assistance to avert this risk of famine. Mobilization of flexible, unearmarked resources will be critical to enable immediate action. But funding alone is not sufficient, humanitarian access to at-risk civilian populations must be ensured.