Racism and racial discrimination violate the core principles of the United Nations Charter, which promotes universal respect for and observance of human rights and fundamental freedoms for all without distinction as to race, sex, language or religion. However, the Secretary-General has acknowledged that the United Nations is not immune to this scourge and has called for action to eliminate racism and racial discrimination within the organization.

In September-October 2020, the IASC issued a survey of its members to capture best practices and lessons learned. The results highlight efforts by IASC members to address racism and racial discrimination, including independently reviewing protocols, policies and practices; recruiting senior staff members dedicated to diversity and inclusion; initiating round tables; conducting participatory assessments and communications campaigns with affected people; and calling for guidance and training.

In addition to consolidating best practices, the IASC developed an anti-racism and discrimination action plan.

IASC members also contributed to the United Nations Task Force to Address Racism and Promote Dignity for All, which was initiated by the Secretary-General in September 2020. 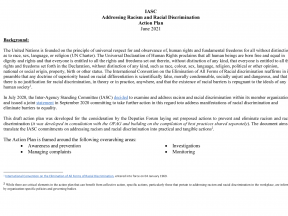 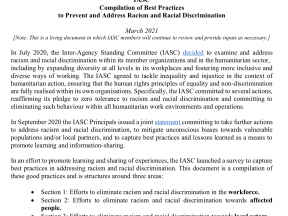 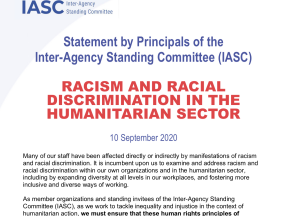 Statement by Principals of the Inter-Agency Standing Committee, Addressing Racism and Racial Discrimination in the Humanitarian Sector, 2020